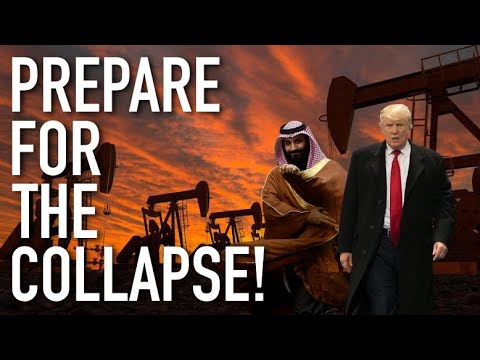 3 views
5 min read
Watch LaterRemove Cinema Mode
FacebookTwitterRedditPinterestEmail
Donald Trump’s plans regarding the current oil price war between Saudi Arabia and Russia lead to a crisis in American’s shale production. Over the course of the past month, after seeing the humiliation of the principal US oil benchmark, West Texas Intermediate (WTI), which is now hitting a negative pricing territory on the oil market, raising economic collapse alarms for the American economy, it is said the US President is considering all options available to make the Saudis pay for the oil price war that they had started.

It seems that are many fueling agents in this fire: not only the probability of having the same price action occurring to each front-month WTI futures contract just before expiry until major new oil production cuts come from OPEC+, or even the economic destruction that happened to its shale oil sector, but the feeling shared by many senior members on Trump’s closest advisory circle that the Saudis had betrayed their long-standing relationship with Washington, and right now, they want to make sure that the Saudis will pay for its actions, in every possible way.
The relationship between the US and Saudi Arabia was established in 1945 by President Franklin D. Roosevelt and the Saudi King at the time, Abdulaziz, during a meeting on board of the US Navy cruiser Quincy in the Great Bitter Lake segment of the Suez Canal, and it has shaped both countries’ association to the present days.
The agreement between the two representatives was that the US would receive all of the oil supplies it needed for as long as Saudi Arabia had oil in place and in return, the US would guarantee the security of the ruling House of Saud. There were some minor alterations on that deal, since the US shale oil industry has peaked and Saudi Arabia has tried to boycott it from 2014 to 2016, settling that the Saudis should not only supply the US with whatever oil it needs for as long as it can but also allow the US shale industry to continue to function and to grow.
In an interview, Trump has affirmed that the Saudi King, Salman bin Abdulaziz Al Saud, “would not last in power for two weeks without the backing of the U.S. military”, which may be accurate, due to the fact that without US protection, either Israel or Iran and its proxy operatives and supporters, are likely to put an end to the rule of the House of Saud when they have the slightest chance to do so.
This was a reminder the US President has given to the Saudis when he sensed a lack of understanding of the “huge benefit” that the US has been doing to the ruling family. Declaring that if Saudi Arabia is losing on export opportunities to American firms in shale production by keeping oil prices up, this is just the price that the House of Saud should pay for the continued political, economic, and military protection the US had offered so far.
Trump has stated early in the oil price war that he would to whatever he had to do to “protect tens of thousands of energy workers and America’s great companies”, imposing tariffs on Saudi Arabia’s oil exports into the US as a letter in the sleeve.
And if for a moment you wondered how imposing tariffs on exportation for an ally country could work, there are three key perspectives which had shown that it would make much more sense the taxation of the Saudi oil over the Russian oil, such as considering that the US imports around 95 percent more oil from Saudi than it does from Russia, therefore, the sanction of Russian oil wouldn’t have such an imponent effect on the US supply excess that is saturating its already-stretched domestic storage facilities.
On the other hand, Russia is at an undeniably superior economic status than the Saudi to deal with distresses related to its oil streams of revenue, with a budget breakeven oil price of US$40 per barrel of Brent rather than Saudi’s US$84 per barrel point.
Lastly, it is important to consider that in the present time, Saudi is providing one of the few large-scale sources of sour crude that is available to the US, including the benchmark Arab Heavy. That is crucial to its production of diesel and also to other purposes where WTI is not adequate.
A great part of the US’s Gulf Coast refinery system is directed to the use of a sourer crude, which made the country invest massively in coking systems and other infrastructure to better handle heavier crudes from the Middle East, over the course of the last few decades….