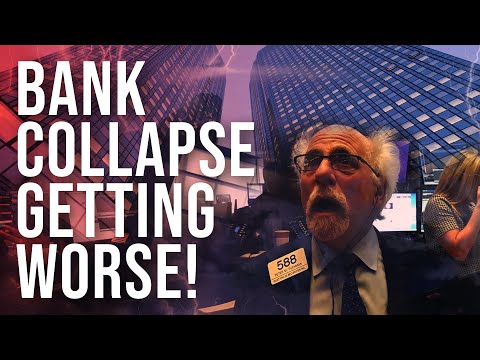 Bank Collapse Getting Worse! America Heading Towards An Economic Collapse !!

88 views
4 min read
Watch LaterRemove Cinema Mode
FacebookTwitterRedditPinterestEmail
The US economy is going through tough times and an economic collapse might be coming very soon. The number of banks and financial institutions that were bailed out in 2008 is nothing when compared to the number of companies that will be bailed out this time round. Our economy is now a complete mess because in the last one month, the stock market has already lost more than $16 trillion and more losses are still come. Analysts are predicting that the market will fall by about 40 percent and this translates to Americans losing trillions of dollars. This is will be the worst economic collapse since the 1930s. Right now everyone is panicking fearing that the worst will happen because right now we are in an economic meltdown that can easily end up being an economic depression.

As a result of this economic chaos and stock market crash, the banking industry is going through the toughest time since the 2008 financial crisis. Right now we are on the verge of a global bank collapse. For example the Deutsche bank is going through many financial problems and right now this bank has a very bad valuation. At the same time, we have many banks that are closely linked to the Deutsche bank and the failure of Deutsche bank will trigger a cascade of bank failures and we might see many banks runs and bankruptcies. Right now the repo market is in a big problem and if it collapses just like the stock market, the whole banking system will be brought down within a short time. Some banks are already down more than 20 percent and right now some of them are ready for a blow up. Unlike other sectors, the banking industry is intertwined and if a few banks collapse, the whole banking system will be in trouble and this will definitely cause the biggest bank collapse in history.

At the centre of this global economic collapse, our banks are loaded with debt and it is a surprise that some banks are already overleveraged up to 100:1. Because of greed, the banks were overleveraged and this was one of the factors that caused the 2008 financial crisis. It looks as if they learned nothing from the 2008 financial collapse and right now they have taken the same course once again. This time, the bank runs and failures will be 10 times what we had in 2008. Right now many banks are struggling to a point where the Federal Reserve has to loan 500 billion dollars to struggling American banks. This is amount of money was lastly loaned to the banks back in the 200 financial crisis and this shows us how the financial industry is struggling.
At the moment, the well being of our banking and the financial systems remains uncertain. Because of greed, the banks have taken huge debts and this has orchestrated the collapse of the banking system and the economy at large. This economic collapse will be bigger than what we had in the 2008 and it will not be a surprise if several banks collapse. What we need now is a complete change in our system and this is the high time when the government has to intervene by coming up with regulations to control how much backs can borrow. The economy also needs to be permanently fixed because for decades, we have had a buoyant economy that has been fueled by debt. The current collapse of our economy is largely because of the deep economic challenges and inefficiency of the government policies. It is now very clear that the American economic system is broken and this is the time for change.