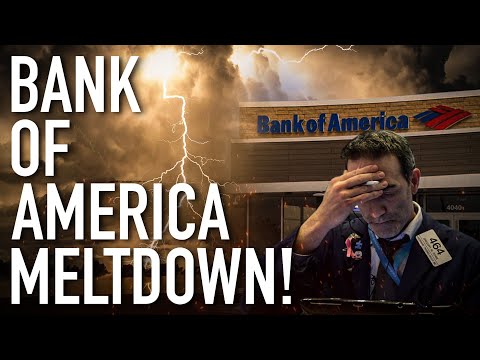 Bank Of America Meltdown: Be Ready For The Coming Apocalyptic End Game

Bank of America is facing its most apocalyptic phenomenon since the Great Depression. The bank crisis that is spreading worldwide is only another chapter in the unfolding of the economic collapse. In today’s video, we are going to examine the recent statements of the bank’s currency strategist Athanasios Vamvakidis, to help you recognize where we’ve been up until now, find out what is coming next, and grasp what looks like the 9th cycle of the financial fiasco.

While the real economy is barely afloat, asset prices keep their strength because the loose macro-policy supports, even more, the decoupling between Wall Street and Main Street. Things are likely to continue the same until an unexpected shock takes place on the markets, making asset price bubbles burst, thereby, needing even looser macro policies to avoid an even weaker real economy, which will create new asset price bubbles.
As result, we have a vicious loop spiraling to an infinity of increasingly higher debt levels, lower interest rates, and larger central bank balance sheets, without inflation, but with an even weaker real economy and even worse asset price bubbles, thanks to the Fed’s policies, which will boost this unprecedented economic crash to a whole new level.
This downward spiral had probably started with low inflation in the 1990s, due to the development of structural forces such as globalization and IT and, as Vamvakidis outlines “the widespread adoption of inflation targeting in the years that followed. Macro policies took advantage of low inflation to loosen too much, and one thing led to another, with a crisis every few years also keeping inflation low.”
In the final section of his statement, the analyst starts affirming that “the end game is not clear, but unlikely to be smooth”. That says a lot about what we are still going to face in the future. This banking crash will be kicked off despite the fact that most central banks and governments are aware of these “risks” – or, as the 1% may call them, opportunities – but they are stuck.
Many attempts to tighten in the past, ended up leading to sharp market adjustments, even when done in small steps. For instance, BofA mentions “the Fed’s QE taper tantrum and its sharp U-turn last year cutting rates and expanding its balance sheet despite unemployment being well below the natural rate, to the ECB being stuck with negative rates well after the crisis and despite serious side effects and reintroducing QE last year at effectively full employment.”
For its part, the government debt is already skyrocketing in most backdrops, especially after the health crisis had begun, the goal now would be to reduce the amount of debt with fiscal consolidation in the years ahead, without hurting the already weak economy, which it’s definitely a very challenging assignment, giving all the aspects we’ve discussed up to now.
In conclusion, Athanasios asserts that the BofA “wouldn’t start from here”, claiming that there’s no easy way out, because, in spite of the market euphoria up until now, the world economy is not in a good place to be in and it is getting worse with every shock. The situation did not look good before, and after the sanitary crisis started, it has become way worse and this is not a sustainable situation for the long-term.
This is essentially the sketch of the whole current trajectory that led us to where we are now.
Economic Collapse News