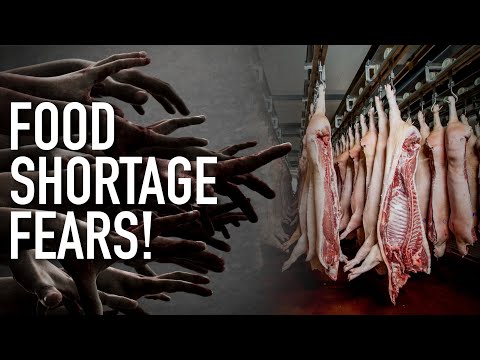 Food Shortage Fears! At Least 10 Meatpacking Plants Close In Weeks All Over America

13 views
4 min read
Watch LaterRemove Cinema Mode
FacebookTwitterRedditPinterestEmail
All around us, there are clear indicators of the ongoing economic collapse. I have already told you about the faltering oil market, the explosion in unemployment claims and the ever-growing risk of a financial implosion in the derivatives market.

In the coming weeks, America and most of the developed world will be facing a severe inflationary crisis in the food sector, the first signs of which are already showing. This will limit people’s access to food supplies, especially meat, and will undoubtedly be followed by social unrest, as a significant unemployed population will find themselves unable to purchase all the supplies they need. Moreover, competition between governments in international markets to secure food supplies for their nations will increase tensions across the board. Don’t be surprised if you hear news about old allies backstabbing or turning their backs on each other.
At the root of the problem is, quite obviously, the current health situation. It affects food supply through two different mechanisms, one direct and the other indirect. Both are simple and readily understandable. As the number of infected workers at food production and processing plants increases, these companies face a shortage in labor supply, making it unprofitable or even technologically impossible to continue operating. After all, even if healthy employees work overtime, at some point there just aren’t enough to operate and supervise all machinery or to perform the work in a timely manner. Imagine having to pick all the fruit in an orchard by yourself when usually it would be a team of five or ten workers doing the job. It takes so long that it just isn’t profitable. This is the direct impact of the outbreak on the food supply chain. The indirect impact are the government-imposed lockdowns. Whilst essential businesses continue to operate, they face new constraints at every step of the production process. From having to implement strict procedures to increased bureaucracy and delays in deliveries, the whole supply chain becomes unbalanced. However, it is the direct consequences of the disease that are, by far, having the most impact.
In fact, over the last weeks, at least 10 meat-packing facilities across the United States have closed indefinitely, as they try to manage and contain the spread of the pandemic in their workforce. The most recent closure is that of Hormel’s Jennie-O Turkey Store, Inc.’s facilities in Willmar, Minnesota.

There is significant inflationary pressure on the price of food both at the national and international levels. According to experts, this could be the start of a long period of stagflation, a situation in which the economy doesn’t grow but prices keep on rising. The last significant stagflation was during the oil crises in the 70’s and 80’s. Daniel Lacalle, chief economist at the wealth management firm Tressis Gestion, has recently warned that “it is very likely that the shutdown of major developed economies will be followed by a shutdown of emerging markets, creating a supply shock as we have not seen in decades. Taking massive inflationary and demand-driven measures in a supply shock is not only a mistake, it is the recipe for stagflation and guarantees a multi-year negative impact generated by rising debt, weakening productivity, rising inflation in nonreplicable goods while deflation creeps into official headlines, and economic stagnation.”.

Are you ready for the oncoming food shortage? Dennis Smith, a senior account executive at Archer Financial Services, has warned that meat shortages in the United States can be expected in less than two weeks’ time. By the first week of May, certain products could already be out of stock in grocery stores all across the country. Bob Brown, an independent market consultant in Oklahoma, has noted that cold storage facilities only keep little more than a week’s worth of production in stock, which wouldn’t be nearly enough to deal with the wave of panic buying that is developing. Widespread food shortages might very soon be a reality in the United States. Don’t forget to share this video with your friends and family so that they too can know the facts and prepare for what’s coming! Read the full transcript here: https://www.epiceconomist.com