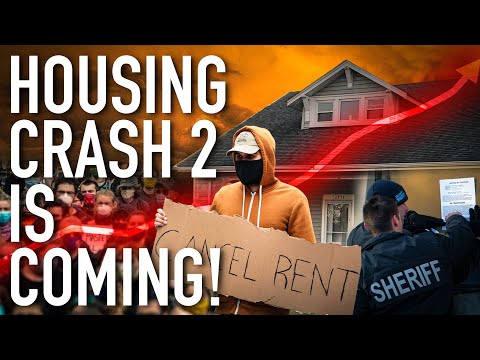 15 views
4 min read
Watch LaterRemove Cinema Mode
FacebookTwitterRedditPinterestEmail
Just like the country saw a second wave of the pandemic, it will now see second waves of other disastrous events and the housing crash 2 will be wipe out millions of Americans. In this video we are going to discuss the catastrophic tsunami of mortgage delinquencies and what that means for the average home owners.

In a recent press release, the Mortgage Bankers Association (MBA) reported that the delinquency rate on residential mortgages surged by 386 basis points in just the last quarter. This marks an increase of 369 basis points from the same time last year.
The announcement also noted that the delinquency rate for mortgage loans on residential properties with anywhere from one to four units now makes up 8.22 percent of all outstanding loans in this year’s Q2. This figure has jumped 4 percent in a single 3 month period, the largest quarterly increase on record.
According to the MBA’s Vice President of Industry Analysis, Marina Walsh, the economic collapse has seriously devastated many American homeowners’ ability to make their mortgage payments on time. Moreover, these second quarter statistics mark the highest delinquency rate hit in the last 9 years.
Particularly striking were the long term delinquencies. This shows just how long Americans have been struggling on the brink of financial insecurity as the recession robbed them of livelihoods and reliable incomes, and wiped out their meager savings.
The 60-day delinquency rate was the highest it had been since the Mortgage Bankers Association began tracking this data in 1979. Meanwhile, the delinquency rate for payments that were 90 or more days overdue hit its highest peak since the Great Recession 10 years ago.
Mortgage delinquencies are closely tied to employment figures. The higher the unemployment rate, the more likely people will be unable to make housing payments as that money is directed towards even more basic needs like food. In fact, the individual states that saw the biggest spike in delinquency rates this quarter were New York, Florida, Nevada, New Jersey, and Hawaii, all of which are heavily dependent on tourism. The leisure and hospitality sectors have been hurting badly this year, and the most American jobs were lost in these fields. New Jersey, the hardest hit, recorded a stunning increase of 628 basis points, far above the national average.


Today, as the housing crisis continues to unravel, the Federal Housing Administration warned that its mortgages hit the highest delinquency rate that they have seen in more than 40 years. Keep in mind that FHA loans are most commonly given to low-income borrowers–particularly first-time buyers and minority groups–as a way to make homeownership more accessible without breaking the bank. That means that these all time high delinquency rates are primarily affecting the most vulnerable portions of the population that have been slammed again and again throughout this year. The seriously delinquent rate, defined as the percentage of loans that are 90 days or more overdue or in the process of foreclosure, increased 467 basis points for FHA loans. Meanwhile, it only jumped by 219 basis points for conventional loans.
With the housing sector breaking records left and right–and not in a positive way–all indicators point to the fact that we are already well down the road towards a housing market crash. And this one will be far worse than the subprime mortgage meltdown of the last major economic collapse from 2007-2009.