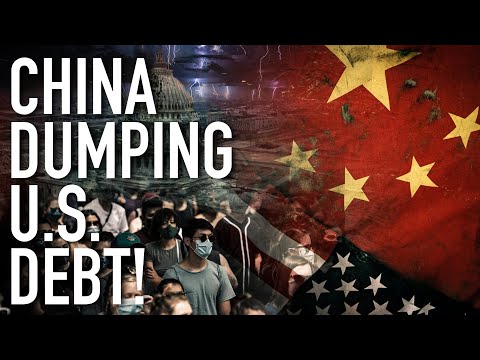 23 views
5 min read
Watch LaterRemove Cinema Mode
FacebookTwitterRedditPinterestEmail
China is now dumping the US Treasurys it holds. In today’s video, we are going to examine how China is weaponizing the American debt in order to add pressure on the US economy and get leverage on the Trade War, boosting not only the dollar collapse or the US economy downfall, but creating a potential threat of a global economic crash.
With a total debt of far above 26 trillion dollars, the US economic structures are barely standing at this point. The Fed has been considering moving into negative interest rates, although Powell had thoroughly affirmed that the Fed would pursue the policy of negative rates right now, and there’s been much discussion about how much longer the agency can linger before it becomes unavoidable to do so. This adds to the number of reasons China decided to get rid of US bonds. China is the second-largest foreign creditor and it doesn’t seem to have an interest in waiting to see what will happen when the dollar devaluation becomes overwhelming.
Tensions between Washington and Beijing keep rising in the face of the global health outbreak, territorial disputes a trade war, and long-standing ideological contest. But before you think China’s intention to dump US Treasuries, weaponizing the American debt against itself comes exclusively from a place of greed or a power move, The US has been weaponizing the dollar for way longer. China is only reciprocating.
China owns over a trillion dollars in US debt, and in the light of the ongoing Trade War and the prospects of the dollar losing its value, massively selling these bonds is an opportunity to preserve the country’s wealth, fight back American sanctions, add pressure to Washington’s presence in Beijing, and ultimately overthrow the supremacy of the US dollar in global commerce.
China has loudly stated it won’t be purchasing US debt anymore and will start getting rid of the US debt it holds, which will directly affect the American economy and the dollar because the US needs places to soak up its debt. The global sale of oil and natural gas in US dollars is what allowed some stability to the currency, however, as the world is watching the American economy crumble, there is a tendency of diversifying transactions with the use of other currencies, such as the Euro, which has been growing in oil purchasing year after year.
In this direction, what has been called the “Nuclear Option”, in essence, China’s decision to weaponize its holdings of US debt, selling these out and flooding the markets with US Treasury bonds is bound to happen soon enough. This means that even if the Fed decides to print more money and buy the 1 trillion dollar debt back, there would still be a massive unbalance on ally countries markets, such as Britain, Netherlands, and France, creating a catastrophe in the world bank and triggering a disastrous worldwide depression.

As a consequence, the dollar crash is likely to happen sooner than expected. Analysts have been arguing that this move will add 10 to 15 trillion to the federal deficit and will make the US economy spiral to its ruin. The American economy is both losing credibility and preeminence in global markets, what is more, it is possibly driving other countries off the cliff with it. In simple terms, countries that are holding US bonds and using US dollars as a reserve currency are also likely to suffer from the impact of the colossal inflation that is being created.
But don’t be mistaken – China will act strategically not to hurt itself during this procedure. As many people may ask if the Chinese economy wouldn’t also hurt from this sell-out, the answer is yes, it would. If the proceedings were made too fast and the dollar crash happened all in once, America would lose its purchasing power, and most imported products come from China, so the Chinese government has to be very cautious not to let that strategy backfire. And up until now, it has demonstrated its great ability to take calculated actions to protect itself from American imperialism. The US debt will be sold gradually, but at the fastest pace possible, to prevent the Chinese economy from further damages.

How the world’s largest economy ended up like this? We’ll have to state the obvious: it got blinded by its own greed. The American capitalists went to explore the Chinese giant market and profit from its cheap labor and ended up making its own market rotten from the inside. The US has never faced such tough times and so much pressure from so many different sectors. That can only create an astronomical explosion that will leave the blood dripping over the face of the Americans. The economy can not run from it, but you still can. All these structured institutions seem pretty solid to us, but they are nothing more than imaginary conventions. The only real thing here is the people. So we can change reality if we are willing to wake up.