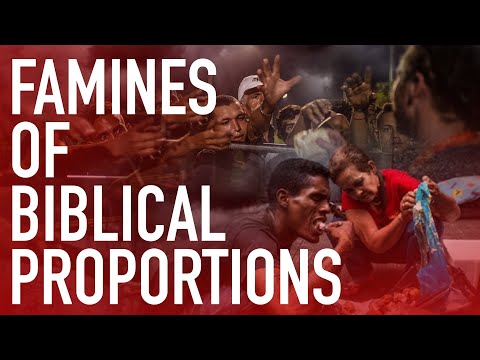 11 views
4 min read
Watch LaterRemove Cinema Mode
FacebookTwitterRedditPinterestEmail
The winner of the Nobel Peace Prize has been warning global leaders that the world is about to experience a famine of biblical proportions. Meanwhile, in the U.S., the number of food-insecure households is fast expanding, the reliance on food banks keeps increasing and pantries are completely overwhelmed by demand. In some cities, people line up for over 12 hours to get enough for only a couple of meals.
In addition to this devastating hunger crisis, lockdowns are expected to get even more strict by January 2021, jeopardizing the survival of struggling businesses and prompting another wave of lay-offs. However, the worst part of it is that millions are on the brink of eviction and could become homeless. That’s what we talk about in this video.
After lockdowns were enacted around the world, wealthy countries saw years of economic and social progress being wiped out in the time span of a few weeks. However, poorer countries have been tremendously affected by the total or partial shut down of their economies, and an alarming share of their populations are already dealing with a dire hunger crisis, and in the face of a second round of lockdowns, their situation could become much worse. This is what David Beasley, the head of the UN World Food Program and winner of the Nobel Peace Prize, has been alerting to global leaders.
He also pointed out that the health crisis has not only worsened but also generated multiple hunger crises worldwide, and with another wave of confirmed cases spreading across the globe, economies are continuing to deteriorate particularly in low- and middle-income countries. That is to say, due to the adverse effects of business shutdowns on the economy, it is likely that the money that was available in 2020 is not going to be available in 2021.
According to WFP estimates, nearly $15 billion would be necessary to avoid a tragic hunger crisis next year, $5 billion just to avert famine, and $10 billion to continue executing the agency’s global programs including for malnourished youngsters and school lunches, which are often the only meal many children can get.Although the hunger problem fortunately hasn’t hit the same level compared to these countries, in the US, the number of food-insecure citizens, especially children, is escalating amid unemployment growth and the absence of federal aid.
For instance, in Maryland, local news reported that the state is indeed experiencing a hunger crisis, and schools have been trying to reach out to low-income children by providing school breakfast programs to at least help the kids to get food. The rise in Maryland’s childhood hunger stressed how breakfast programs in schools are more needed now than ever before. For every 100 low-income students about 62 are reliant on school meals to be able to eat.
Low-income families are becoming increasingly dependent on government programs and food bank assistance to get the supplies they need to feed themselves for a week or two. Now that the holiday season is approaching, thousands of unemployed workers are waiting up to 12 hours at drive-thru food banks.
This is what has been happening in Texas, according to the Texas Workforce Commission, the state’s unemployment rate in September was at 8.3 percent, marking an increase from 6.8 percent in August. Economists say that this surge is an example of how some industries that had hoped to overcome the health-crisis-induced economic recession have not yet been able to do so and have instead just have informed they will be letting go a large number of employees by the end of the year.
However, the recession disproportionately affected other states, such as Nevada, which has a strong emphasis on the service industry and tourism, and some of these jobs may never come back. Also known for its celebrated tourism New York City has 19 percent of its population facing food insecurity, and almost 300,000 New Yorkers have moved out of the city to avoid the coming eviction crisis.
Also, as of January 1, the CDC moratorium is lifted nationwide and those who have missed rent payments are at risk of eviction. The Center for Disease Control is warning that massive evictions will create a homelessness crisis of unprecedented proportions, that could put 10 percent of the American population at risk of losing their homes. The consequences of leaving its citizens unemployed, hungry, and without a home will certainly trigger a lot of turbulence in the U.S. streets in the coming months. 2020 was just the beginning of the collapse, and we will still be seeing the impacts of this catastrophic crisis for a long, long time.